This is a handy blood sugar converter that helps you interpret glucose levels in the blood by converting US blood glucose values in mg/dl into mmol/L and vice versa. It also explains various concepts related to blood sugar levels.

What is blood sugar?

Blood sugar describes the amount of glucose in blood. It’s usually described in moles per liter (mmol/l) or milligrams per deciliter (mg/dl). The standard level of blood sugar in humans is around 4,5-5,5 moles/liter. Serious health problems may occur when the blood sugar level is too high or too low.

What is blood sugar level?

The blood sugar level (aka. blood sugar concentration or blood glucose level) is the measurement of the amount of glucose present in the blood. Glucose is an essential source of energy, our bodies make it, but glucose mostly comes from the food we eat. 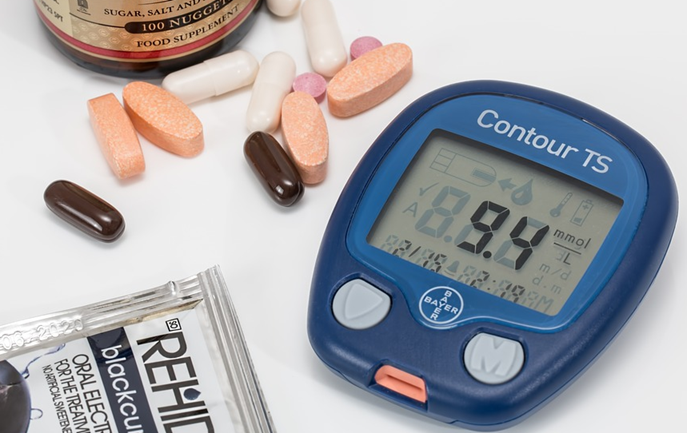 Normal glucose levels are between 72 and 108 mg/dL (= 4.0 to 6.0 mmol/L). These values are usually lower in the morning and rise during the first two hours after each meal. Pathologically high values indicate hyperglycemia whilst lower than normal values indicate hypoglycemia. Long term hyperglycemia is associated with diabetes mellitus, heart and/or kidney disease whilst hypoglycemia may lead to lethargy, shaking, sweating, muscle weakness and impaired mental function.

The international standard way of measuring blood glucose levels is in terms of a molar concentration, measured in mmol/L (millimole per liter). In the U.S., Germany and some other countries blood sugar level concentration is measured in mg/dL (milligrams per decilitre).

Milligram per deciliter, the unit used in medicine to measure the concentration of substances in the blood. 1 mg/dl equals 0.01 grams per liter (g/L).

Millimole per liter, the SI unit in medicine for measuring concentrations of substances in the blood.

The blood glucose converter can perform either of the conversions, be it that we start from mg/dL or mmol/L.

In the US, the miligrams per deciliter, mg/dL is preferred. This is equal to 0.0555 mmol/L.

How to use the blood sugar converter?

This calculator is created with
Visual Paradigm Spreadsheet Editor