What is Six Thinking Hats?

You ‘put on’ or ‘take off’ one of these hats to indicate the type of thinking being used. A ‘thinking hat’ is a metaphor for a certain way of thinking. By mentally wearing different thinking hats people are forced to look at a problem from different perspectives. Thus a one-sided way of thinking is excluded and new insights are created. The key concept for using Six Thinking Hats are as follows:

Six Thinking Hats has been specifically designed so that everyone thinks in parallel using only one hat at a time. The process works best with a time limit (5 minutes maximum) for each hat. This encourages the group to ‘try on other hats’ and specifically helps people who may have very entrenched views to consider the idea from different perspectives.

This covers facts, figures, information needs, and gaps. It looks at what is known and what information could be missing. The association is with paper, on which ‘facts’ are recorded.

This covers intuition, feelings, and emotions. It focuses on what people feel about the issue under discussion. Importantly, there’s no need to rationalize or explain.

This is the hat of judgment and caution. It is the most valuable hat. The focus here is on problems, risks, and challenges that this idea might pose.

This is the logical positive— why something will work and why it will offer benefits. It can be used in looking forward to the results of some proposed action, but can also be used to find something of value in what has already happened.

This is the overview or process control hat. Could you summaries the findings so far? What needs to happen next?

This is the hat of creativity, alternatives, proposals, what is interesting, provocations and changes. This hat is often used in a brainstorm to generate ideas. 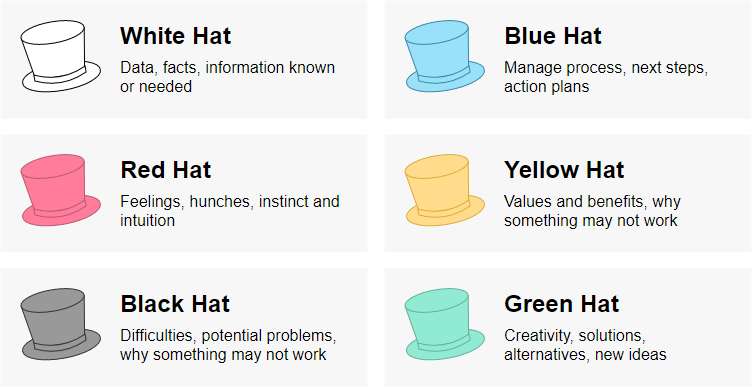 The Sequence of Hats – What is Your Strategy?

You may come across many different six thinking hats templates or articles that used a different sequence of these hats. So which order should be used when we conduct an analysis? Depending on the goal and issue you can mix and match different hats in this sequence for serving different purposes as suggested by the Wikipedia: