What is Causal Loop Diagram? (With Examples)

Causal loops diagrams (also known as system thinking diagrams) are used to display the behavior of cause and effect from a system’s standpoint. Fishbone diagrams may elicit the categories of causes that impact a problem. Causal loops show the interrelation causes and their effects. When finished you have a diagram of the positive and negative reinforcements which describe the system of behavior. The neat thing about causal loops is it is depersonalizing. People can point at the arrows in the loop that are reinforcing the problem instead of pointing at people. It becomes a model of system behaviors that create the outcome of the system. 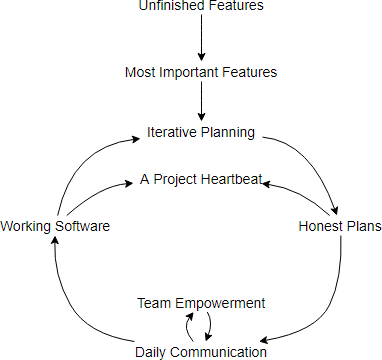 A Growth and Underinvestment structure is simply an elaborated Limits to Growth structure where the growth inhibitor is part of another Balancing Loop with an external standard and some delay. The nasty thing about this structure is that the two balancing loops form a single reinforcing loop that inhibits growth.

A new home delivery-focused pizzeria opens up in the neighborhood. At first, the demand is low, but the pizza’s quality is excellent, as well as the delivery times. After a while, the pizzeria gets noticed and is featured in a local online food blog. As a result, the demand for pizza rises sharply. But the pizzeria owners are reluctant to purchase more delivery capacity (pizza delivery vehicles and personnel) along with higher pizza production capacity (additional pizza ovens). That results in higher delivery times and a larger percentage of undercooked pizzas, in turn lowering the number of returning customers. As a result, the pressure for additional investment in both delivery and production capacity is eliminated. The pizzeria owners are happy that they held off on the additional investment. 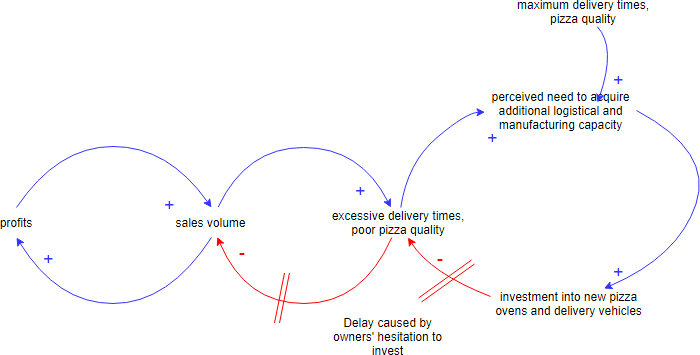