Data modeling is a technique to document a software system using entity relationship diagrams (ER Diagram) which is a representation of the data structures in a table for a company’s database. It is a very powerful expression of the company’s business requirements. Data models are used for many purposes, from high-level conceptual models, logical to physical data models and typically represented by the entity-relationship diagram. It serves as a guide used by database analysts and software developers in the design and implementation of a system and the underlining database.

What is Entity Relationship Diagram?

An Entity Relationship Diagram (ERD) is a pictorial representation of the information that can be captured by a database.  Such a “picture” serves two purposes. It allows database professionals to describe an overall design concisely yet accurately. An ER Diagram can be easily transformed into the relational schema. There are three components in ERD: Entities, Attributes, and Relationships. 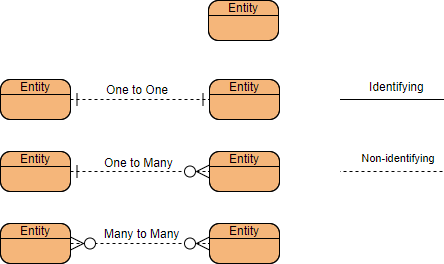 The number of tables you need for your database – Entities is the basic objects of ERDs. These are the tables of your database, i.e. students, courses, books, campus, employees, payment, projects. A specific example of an entity is called an instance. Each instance becomes a record or a row in a table.

Information such as property, facts you need to describe each table – Attributes are facts or descriptions of entities. They are also often nouns and become the columns of the table. For example, for entity students, the attributes can be first name, last name, email, address, and phone numbers.

In an ER diagram, cardinality is represented as a crow’s foot at the connector’s ends. The three common cardinal relationships are one-to-one, one-to-many, and many-to-many. Here is some examples cardinality of relationship in ERD: 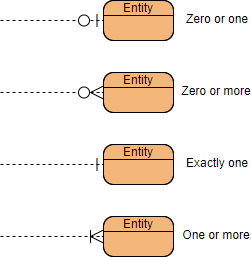 Suppose we have the following business scenario:

The ERD above using the Crow’s Foot notation:

A general understanding to the three data models is that business analyst uses a conceptual and logical model to model the business objects exist in the system, while database designer or database engineer elaborates the conceptual and logical ER model to produce the physical model that presents the physical database structure ready for database creation. The table below shows the difference between the three data models. An ER model is typically drawn at up to three levels of abstraction:

While all the three levels of an ER model contain entities with attributes and relationships, they differ in the purposes they are created for and the audiences they are meant to target.

In the table, it summarizes the characteristics of the three data model:

Conceptual ERD models the business objects that should exist in a system and the relationships between them. A conceptual model is developed to present an overall picture of the system by recognizing the business objects involved. It defines what entities exist, NOT which tables. For example, ‘many to many’ tables may exist in a logical or physical data model but they are just shown as a relationship with no cardinality under the conceptual data model.

Logical ERD is a detailed version of a Conceptual ERD. A logical ER model is developed to enrich a conceptual model by defining explicitly the columns in each entity and introducing operational and transactional entities. Although a logical data model is still independent of the actual database system in which the database will be created, you can still consider that if it affects the design.

Physical ERD represents the actual design blueprint of a relational database. A physical data model elaborates on the logical data model by assigning each column with type, length, nullable, etc. Since a physical ERD represents how data should be structured and related in a specific DBMS it is important to consider the convention and restriction of the actual database system in which the database will be created. Make sure the column types are supported by the DBMS and reserved words are not used in naming entities and columns.

The main goal of a designing data model is to make certain that data objects offered by the functional team are represented accurately. We should first start from the conceptual data model and as more and more information available we add more details to refine it from conceptual to the logical model. Finally, when we know exactly how to implement the database of our system, we can refine our logical model into the physical data model which can directly map between the diagram and the actual database system.