What are the Most Essential 7 Management and Planning Tools?

The seven management and planning tools were the result of operations research and TQM in Japan after World War II in the 1970s. This toolset can be used to encourage innovation, facilitate communication, and help for planning in a team approach. These tools were developed independently for diverse purposes. However, they were assembled as a set of techniques for achieving efficiencies in the planning and management of operations.

These 7 Management and Planning tools are:

The Most Essential 7 management and planning tools

What is an Affinity Diagram?

The affinity diagram organizes a large number of ideas into their natural relationships. It is used to generate, organize, and consolidate information related to a product, process, complex issue, or problem. After generating ideas, group them according to their affinity, or similarity. This idea creation method taps a team’s creativity and intuition. It was created in the 1960s by Japanese anthropologist Jiro Kawakita.

3 Steps for Creating an Affinity Diagram

To creating an affinity diagram, it involves: collect/organized and analyzed data into useful information. The affinity diagram is normally led by a facilitator to guide the team through the following steps:

Conduct a brainstorming session and use the affinity diagram to identify how to successfully implement and sustain change within an organization as shown in the Figure below:

What is an Interrelationship Diagram?

A local physicians’ group is experiencing a relatively high number of patient complaints regarding the lack of returned phone calls following a patient visit where some kind of test was ordered. In particular, the patients are frustrated that the promised call notifying them of the test results is either delayed or must be initiated by the patient. The office manager of the group conducts a brainstorming session to generate potential reasons for the lack of effective and timely follow-up calls.

The group then takes the brainstormed list and organizes the potential reasons using an interrelationship diagram (Source: sixsigmadaily.com) 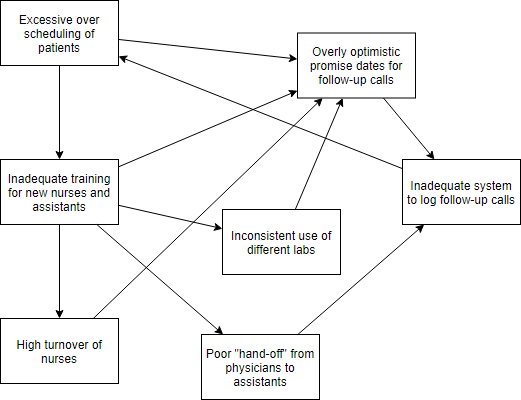 What is a Tree Diagram?

Tree diagrams use a structure with broader categories on top and break them down into details at the lower levels (Liu, 2013). For root cause analysis, the failure under investigation should be listed on top of the tree diagram. The potential causes of the failure are then listed beneath the first failure. A tree diagram can be used to visualize the many potential failures that led to a final failure; however, the failures identified should still be empirically investigated.

In addition to the basic usage of a decision tree, it can be easily modified to suit any situation by structuring it in multiple levels for accommodating additional information, such as potential risks, drawbacks, and solutions.

What is Matrix Diagram?

A Matrix Diagram is a tool that illustrates the critical relationships between or among two or more groups. It can be enhanced to show things like the strength of the relationship or the different aspects of the relationship. The matrix can be thought of as a special form of a table where the cells contain a simple symbol or number, which is derived from a defined set of rules.

For example, the example below shows how the relationship between two items can now be indicated in the cell where the row and column of the two items interlinked.

What is Matrix Data Analysis Chart?

The Matrix Data Analysis Chart (or MDAC) helps classify items by identifying two major characteristics common to all items and then plotting each item as a point on a standard x-y chart. This makes it easier to see how the individual items relate both to the characteristics and one another.

For example, a washing powder may have different efficiencies at achieving ‘softness’ and ‘stain removal’ in garments made of acrylic, polyester, wool and various fiber mixtures. If similar effects are found in a group of fibers, then changing the powder ingredients may similarly affect the whole group. 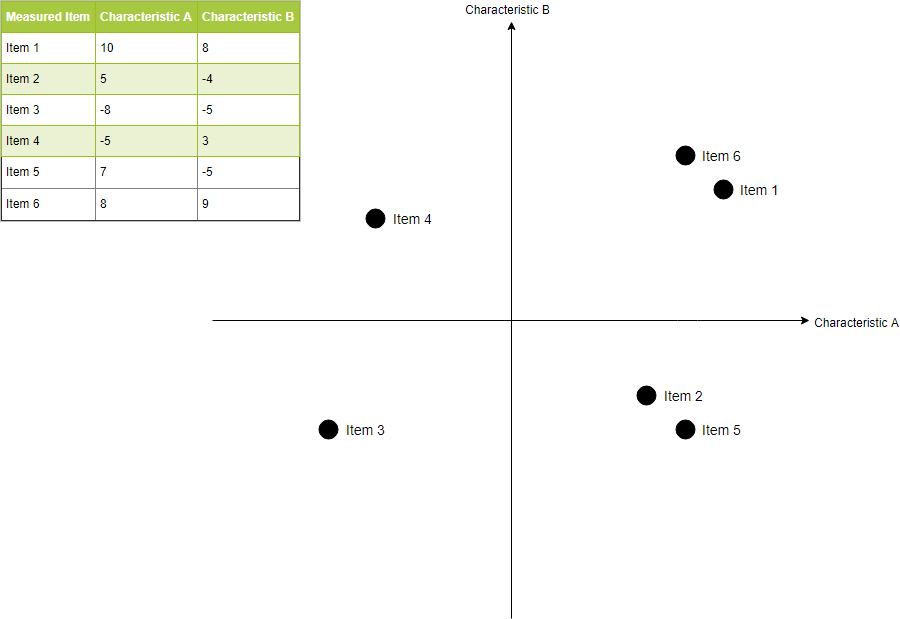 Such a chart shows the clustering and positioning of items relative to one another.

What is an Arrow Diagram?

Note that the dotted line represents a dummy activity to ensure that Event change starts only after both Verify change order and Assure stock are completed.

A Process Decision Program Chart (PDPC) is a tool for identifying and documenting the steps required to complete a process. It is often used in the problem-solving process where it allows for the identification of potential process issues that have led to a process failure.

The process statement is placed at the top level of the chart and the required process steps move from left to right at the next level. Further levels of detail may be required until the final level is reached which indicates countermeasures that might be taken to prevent any delay with the process implementation.

As shown in the Figure below, different shaped boxes are used to highlight risks and identify possible countermeasures (often shown as “clouds or ovals” to indicate their uncertain nature).